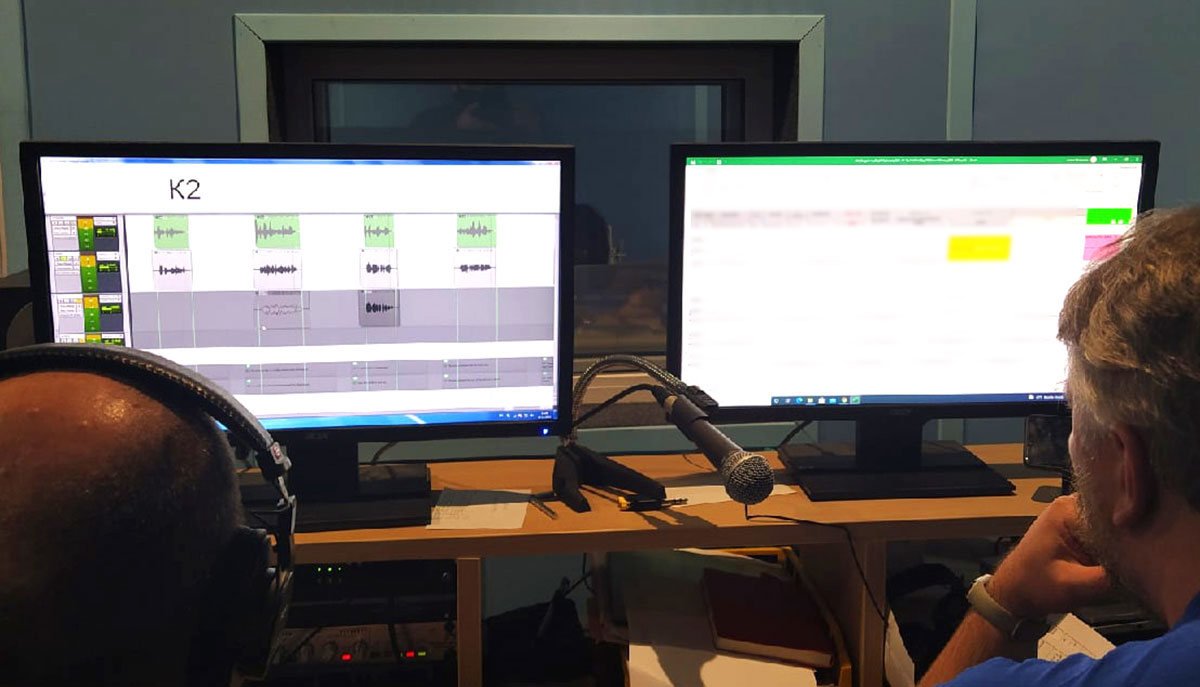 A great game deserves to have as many people as possible discover it. If your production has been successful at home, you will most likely want to share it with users abroad. And to do this, you — and your characters — need to communicate with these users using one single language. “So it’s decided: let’s translate!”, you think. You analyze the foreign markets meticulously, create a list of the languages you’re interested in...

If you’ve developed a text-based quest or an app with recipes, then it’s all pretty clear: get a translation and change the text wherever it appears. But what about games with spoken language? Do you re-record the heroes’ and narrator’s lines or do you make do with subtitles? 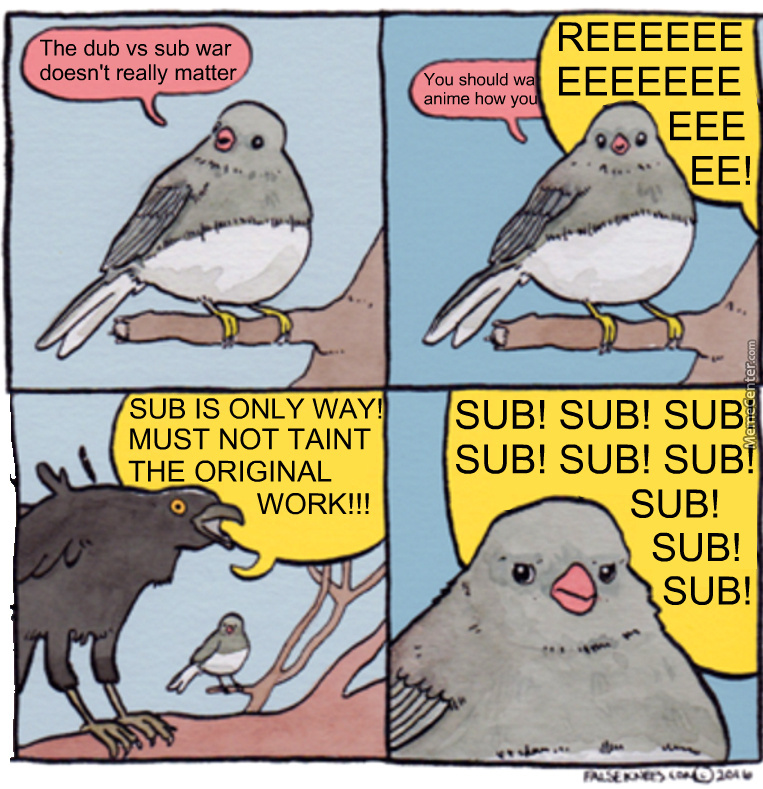 Adding subtitles is undoubtedly cheaper than recording new dialog tracks or videos in several languages. But besides financial concerns, it’s also important to think about cultural specifics: some countries will be more than happy to follow subtitles, while others will throw your work straight in the bin immediately after installation if there’s no voice-over.

To make it easier for you to choose, we have studied what people think of voice-overs and subtitles in movies and games in different countries. Based on research by Newzoo, we have put together a list of the top ten most profitable languages for game translations in 2019:

Let us tell you what you need to know about the speakers of these languages.

In English-speaking countries, users tend to prefer subtitles. This is because people living in the USA or UK, for example, have a hard time dealing with the lack of synchronization between movement of the hero’s lips and the words being spoken. To avoid this, American studios often purchase the rights to the production and record their own version with English-speaking actors.

On the other hand, many foreign games, especially Japanese games, have an English-language voice-over. Sometimes, characters are re-programmed in order to better synchronize the audio and the movement of the lips. Dubbing is also used a lot in anime and cartoons for little ones — for viewers where subtitles offer no help at all, as they simply can’t read.

In China, you will find localized versions of productions which use both subtitles and dubbing. China began re-recording film audio in the mid-20th century: the majority of local residents didn’t know any foreign languages, and a third of the population was still illiterate as late as the early 1980s. However, as the level of education has increased, so has the demand for subtitle banners.

Things proved to be tougher when it comes to video games: between 2000 and 2015, China imposed a ban on the sale of games consoles which account for around a third of the entire industry’s revenue. As a result, even in 2019 games consoles’ share of the gray market (for which voice-overs are too costly an affair) superseded the legal segment. As a result, people in China have become accustomed to playing with subtitles.

Ten years ago, the competition between subtitles and dubbing was relatively even in Japan. On the one hand, the voice-over industry is highly advanced in the Land of the Rising Sun. While in most countries screen or stage actors do this type of work, in Japan being a voice-over actor, or Seiyu, is a profession in its own right. Seiyu are often heavily associated with their characters, and fans love their voices so much that many dubbing actors go on to become famous singers.

On the other hand, if a voice-over turns out to be unsuccessful, this causes a tidal wave of criticism from users. That’s why many productions give gamers a choice. The game Death Stranding, for example, was developed by Japanese studio Kojima Productions but the characters’ voices were originally recorded in English. Right at the start of the project, the head of the studio promised Japanese gamers two language options: the original and, strange as it may sound, a Japanese dub.

The dubbing industry in South Korea grew significantly between 1980 and 1990, but today the majority of Koreans prefer watching foreign movies with subtitles. The reason for this is the unprofessional approach and high number of poor mistakes made in voice-overs for famous movies. As a result, today South Korea only records voice-overs for kids’ cartoons and a small number of high-budget motion pictures. In terms of gaming, Koreans also prefer subtitles, although you may also come across voice-overs — such as in Diablo III, for example.

The tradition of dubbing has a long history in Germany: here, they began recording voice-overs for foreign movies back in the first half of the 20th century in order to support their national language and ideology. After the Second World War, dubbing became even more relevant: in the post-war period, the German public preferred watching movies in their native language.

Today, the German dubbing market is the strongest in Europe. Germany even hosts an annual festival where awards are presented to voice-over artists, some of whom go on to become household names. As a result, users in all German-speaking countries — Germany, Austria and Switzerland — prefer voice-overs to subtitles.

The majority of French people are used to dubbing: just like in Germany, they have been recording voice-overs for foreign movies since the start of the last century. Today, only arthouse movies are released with subtitles, and popular movies can only be watched with the original voice-over at select theaters in the larger cities.

And it’s not just people living in France who will be grateful to you for providing a French-language voice-over, but also users in Monaco, French-speaking Belgium, Switzerland, Canada, and even a few African countries.

Spain also has a rich tradition of dubbing foreign movies. Some local voice-over actors have become famous celebrities. Given that the country does not have a very high level of proficiency in English, users are more accustomed to consuming content in their native language.

It’s worth noting here that it’s not just Spain where Spanish is spoken, but also the majority of countries in Latin America where the situation regarding dubbing and subtitles varies. Here, for example, movies destined for broadcast on free-to-air TV channels have their voice-overs re-recorded, while movie theaters and cable channels show the original versions with subtitles. On the other hand, in the last few years a few big, subscription channels in Latin America have begun transitioning to voice-overs for movies. Mexico is toying with the idea of introducing mandatory dubbing of movies not just into Spanish, but also into the country’s minority languages. The dubbing of games is also gaining momentum. That being said, the Peruvian public still really prefers subtitles.

Italians also have a strong tradition of preferring dubbing over subtitles. Thanks to the protectionist politics of Benito Mussolini, the movie industry began re-recording voice-overs on a massive scale as early as the 1930s. In just a few short years, the Italian school of voice-overs became one of the strictest in Europe under the leadership of eminent personages such as Alberto Valentino, brother of actor Rodolfo Valentino. The school still exists today — and the best dubbing actors in Italy are presented with awards at several professional festivals, such as Voci nell'Ombra.

Russia is another country with a rich history of dubbing. The decision to re-record voice-overs was taken back in the 1930s — literacy rates were still low among the population at this time, and many could not read subtitles. The Soviet school of voice-overs was very strong, however the quality of dubbing decreased after the fall of the USSR.

Nevertheless, to this day almost all foreign movies are dubbed before being released in movie theaters. Video games also use voice-overs: the level of proficiency in foreign languages in the country is still quite low. However, it is still possible to see a slight shift toward subtitles. In 2017, for example, one of the deputies of the legislature for the Leningrad region of Russia proposed showing movies on TV in their original versions to motivate Russians to learn foreign languages. Nevertheless, taking to the Russian market without any dubbing is not worth it just yet.

Since the audience in Portugal is not exactly huge, it’s not surprising that the majority of studios choose Brazilian Portuguese when localizing their productions. Brazil shifted from dubbing to subtitles and back again more than once during the 20th century, although over half of Brazilians prefer watching movies in their native language.

And so, this is what our research has shown: 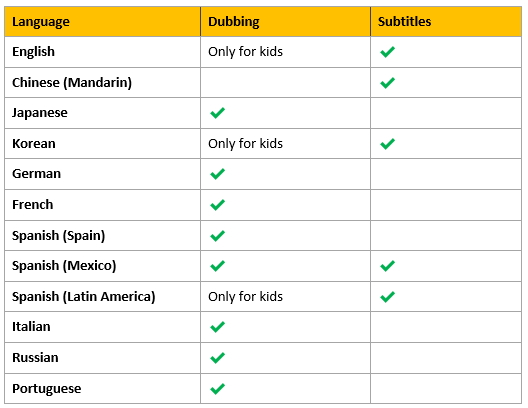 As you can see, there’s no one single answer to the question “dubbing or subtitles?”. In order to make the best decision, you need to study the whole audience for your game or app. Now you know all about the biggest games on the market, it’s about time you take a look at your budget and get down to localizing into those languages that look worthwhile.

Good luck with this not-so-simple task!