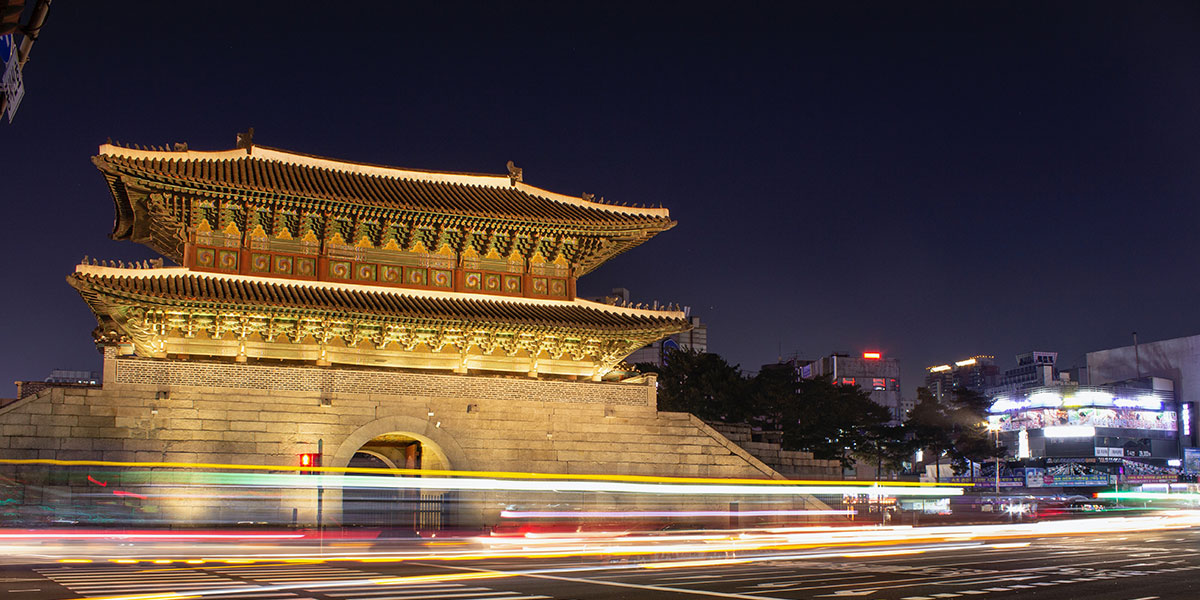 We’ve all heard about the robust South Korean video game market. South Korea is a hi-tech country. It’s the birthplace of esports and a number of world-famous titles. It was here, in the offices of Korean developers, that new genres and mechanics were created that have since shaped the modern face of the game industry. And while South Korea still shares the lead with China, the US, and Japan, its role in the history of gaming cannot be overestimated.

In this article we’re going to touch on the primary features and strengths of the Korean market and talk about the finer points of localization. But let’s start with a few stats.

For localizers and developers, South Korea represents 51 million people, 70.5% of whom are gamers.

It has the fourth largest video game market in the world. According to Statista, gaming made South Korea USD $6.283 billion in 2021, and five years from now it’s slated to make half again more: $9.614 billion. Mobile games are the most lucrative segment here, having made $4.583 in revenue last year. 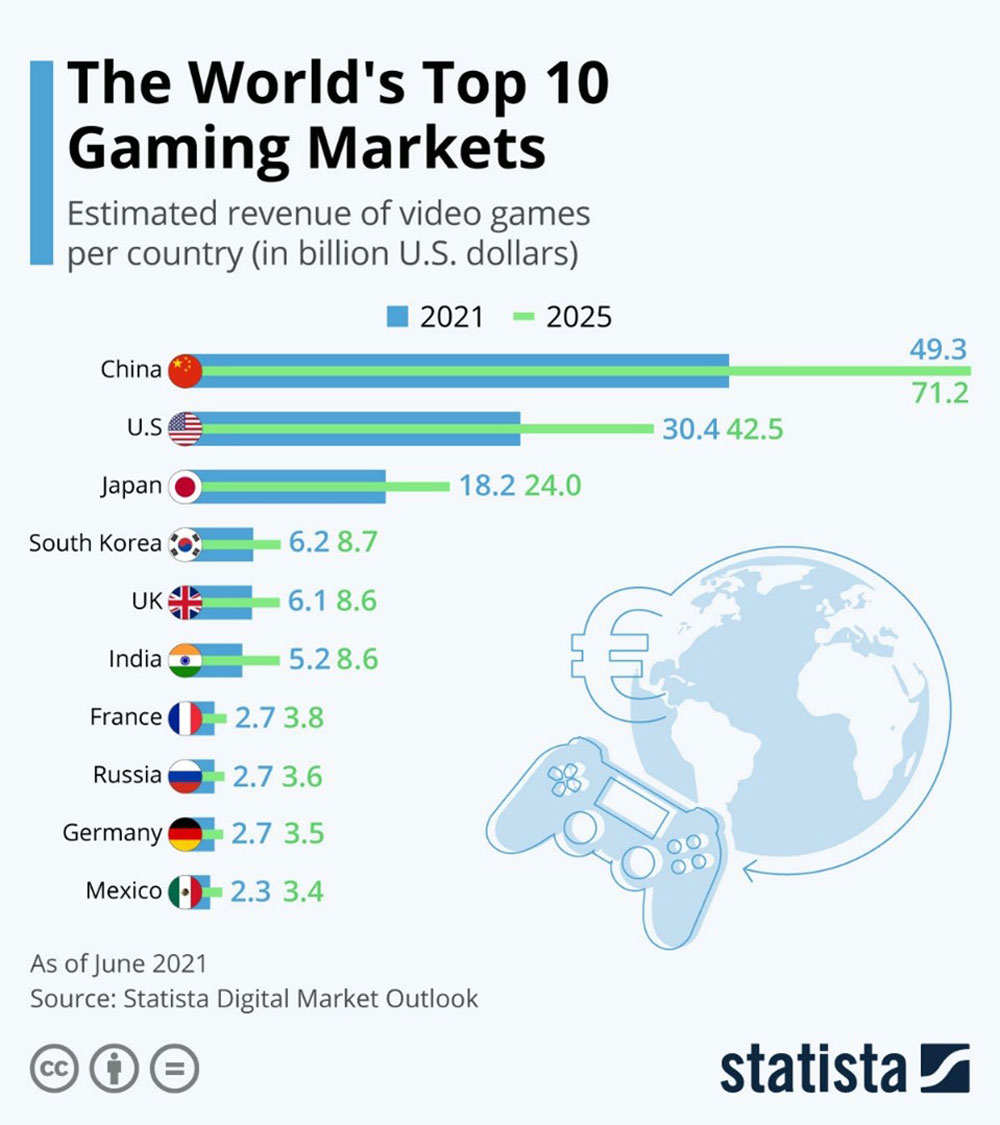 When it comes to mobile phone penetration, South Korea is the world leader, hands down. 95% of the country’s population uses smartphones (primarily the Korean brand Samsung). Google Play is the most popular game distributor here. It’s followed by KakaoGames, a local app store with an audience of 49.8 million.

South Korea also makes more in-game purchases than any other country. According to the latest data from AppAnnie, Korean Android users (90% of the population) spend an average of $13 on games every month. In comparison, Japanese users spend $12.70, and Americans spend $6.10. But while Koreans are some of the most generous players in the world, most of them aren’t exactly champing at the bit to buy games if there are free-to-play equivalents available. So the paid titles on Google Play only account for a modest 6%. The rest goes to free-to-play games with ads (81%) and in-game purchases (52%).

Koreans’ favorite genres are RPGs, MMORPGs, action games, and sims. And the most active gamers in South Korea are under 20: 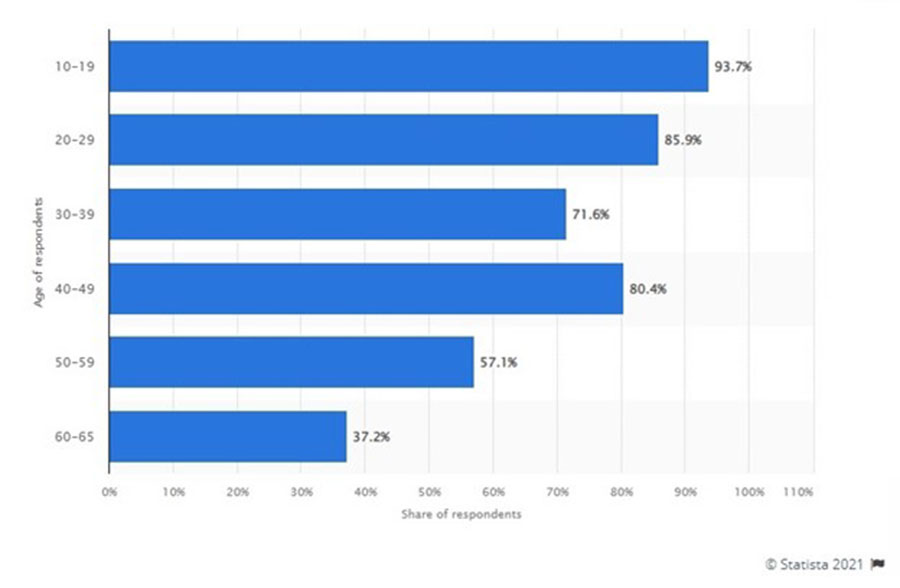 Made in South Korea

To draw a comparison with the fashion industry, South Korea can be considered a trendsetter when it comes to video games. Almost all Korean companies have successfully promoted their titles in foreign countries.

For example, a number of famous MMORPGs come from Korea, including Lineage, TERA, Blade & Soul, Black Desert, ArcheAge, Aion, and more. They’re the ones who have taught players to grind, i.e. to earn experience or currency by performing the same actions over and over again.

The battle royale trend is also often considered to be an offspring of Korean developers. This genre may have existed before (primarily as mods for existing games), but it was PUBG, which was originally developed by a Korean studio, that helped it reach a new level of quality.

And this brings us to a certain quirk of Korean gaming. Unfortunately, this segment has taken a hit due to pandemic-related restrictions, but for Koreans it has been and remains a symbol of rowdy gamer culture. We’re talking about PC-bangs or “computer rooms.”

They’re the Korean equivalent of internet cafes, and they’re basically every gamer’s dream come true – cutting-edge computers with powerful video cards that can play any modern game on “ultra,” high-speed internet, and even the ability to order fast food without having to pause your game. In other words, it’s the perfect place to hang out with friends and play some League of Legends, which is the most popular game in PC-bangs. And tournaments and esports practice sessions are often held there too.

By the way, South Korea is one of the first countries where people have started seeing “pro gamer” as a real job. It all started with the StarCraft craze that took the country by storm in 1998, leading to the first-ever StarCraft tournaments. Since then, Korean esports competitions have become enormously successful. Major corporations now sponsor successful teams. They have their own fan clubs. A South Korean association of profession gamers called KeSPA ranks the best players and holds official tournaments that are broadcast on TV. The media follows local esports athletes, gamers root for them, and their fans adore them.

Some developers have used this for marketing purposes, although advertising a game through local channels can be expensive. Famous Korean gamers promote titles on YouTube, Twitch, and the local platform AfreecaTV and share their impressions on Naver Café and Naver Blog.

But this isn’t the only way to generate buzz about a game. South Korean pop culture or hallyu has taken over not just Asia, but all over the world, and local and foreign companies actively take advantage of this fact. For example, Riot Games, the developers of League of Legends, have created a virtual K-pop group called K/DA made up of characters from the game. Their high-budget videos have more views than League of Legends itself. And this is far from the only music-related project where Riot Games has straddled the divide between American and Korean culture. 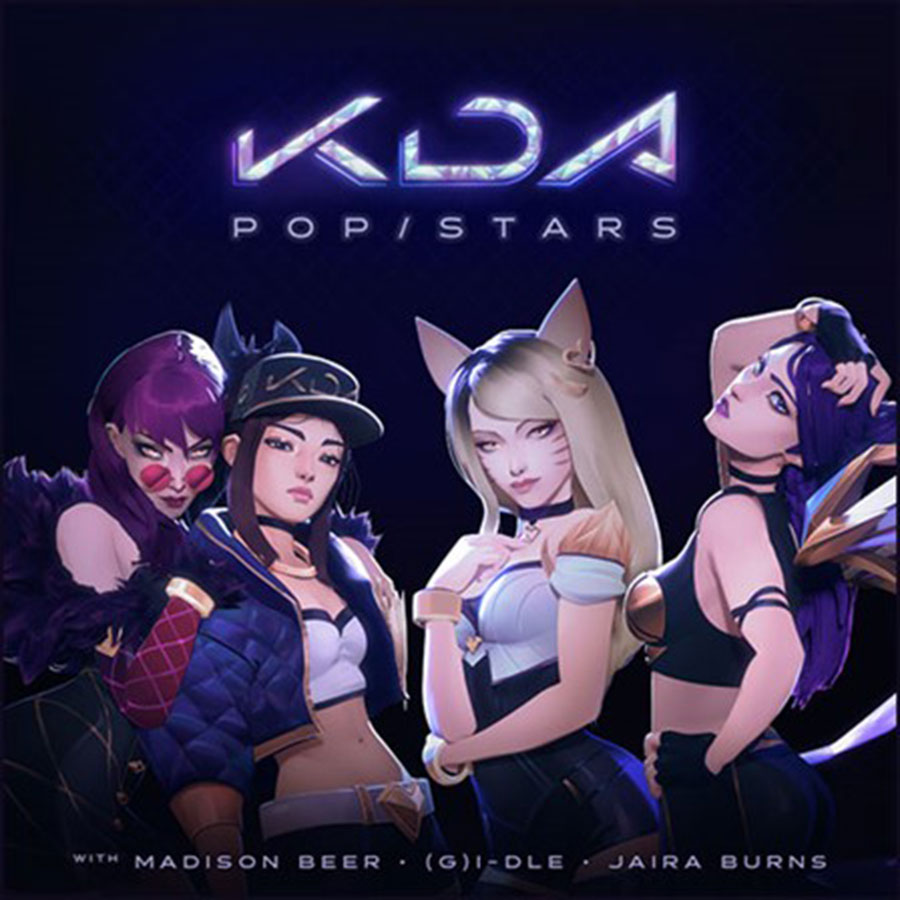 Western culture, especially Americans movies, music, and games, has had just as much of an influence on South Korea. This country is generally known for having a more open-minded relationship with foreign products than, say, China. However, games are still censored here, so it’s best to avoid divisive political themes related to North Korea, Japan, etc. Otherwise you’ll end up like the developers of Age of Empires, who had to change their game’s storyline for Korea by distorting historical facts. Scenes of violence and obvious cruelty can also lead to major issues.

The second important thing to consider is the nature of the Korean language. South Korea is a mono-ethnic nation, so translating a game into Korean basically guarantees that 96% of the population will be able to understand it. As long as your localization is of good quality, of course.

But Korean has some tricky features. For example, Koreans draw distinctions between seven different degrees of conversational formality, and the construction of words and phrases depends directly on them. In order to properly choose a style of speech, you have to analyze a number of criteria such as the interlocutor’s age, status, and level of education, the existence of family ties, etc. On top of this, each degree of formality corresponds to a certain intonation pattern, which needs to be taken into consideration when recording voiceover.

Also, Korean is literally made up of loan words. 60–70% of Korean words come from Chinese. The number of Americanisms is also growing by the year. They’ve made their way into every facet of life, from art and culture to politics and economics. So the Korean equivalent of an English word will sometimes sound old-fashioned to Koreans themselves. Because of this, when localizing a game, you need to consider the modern state of the language.

Word order is very different in Korean than in English and most other European languages. It’s kinds of like how Yoda talks — end sentences with verbs he does.

Hangul, the Korean alphabet, is usually written horizontally, from left to right. But traditional vertical writing can also be used, which can lend a game an air of mystery and archaism. Just keep in mind that HUD windows need to be adapted to Hangul’s larger letters (also known as chamo) ahead of time to make them readable on a smartphone. As a rule, the text itself will be 15–20% shorter than in English.

If your title is a paid game or features in-game purchases, all prices need to be listed only in won with the ₩ symbol. You’ll want to steer clear of the acronym KRW. Dates are written like this: “year-month-day.”

And be careful when choosing numbers. Koreans have a penchant for tetraphobia, or the fear of the number four, which is pronounced the same as sa, the word for “death.” It’s often skipped when numbering apartments and floors in buildings, and sometimes it’s written as F to avoid bad luck. The same fate often befalls the number 13.

Colors are also symbolic: white stands for purity and innocence, and red stands for the sun and life energy, as well as the masculine principle of yang. Its opposite is dark blue, which represents sensitivity, flexibility, and the feminine energy of yin. These colors appear on the Korean flag. Black represents both mourning and cosmic, transcendental wisdom. Although it’s recently been more strongly associated with luxury and high prices thanks to the influence of Western culture.

By the way, about colors — Koreans love bright, vibrant colors, including neon shades, so don’t be afraid to crank the contrast and vibrancy of your graphics up to eleven. If your game has anthropomorphic animal characters, so much the better. Focus on them in the screenshots and clips on your game’s page, and Koreans will eat it up. Take the Kakao brand, for example: 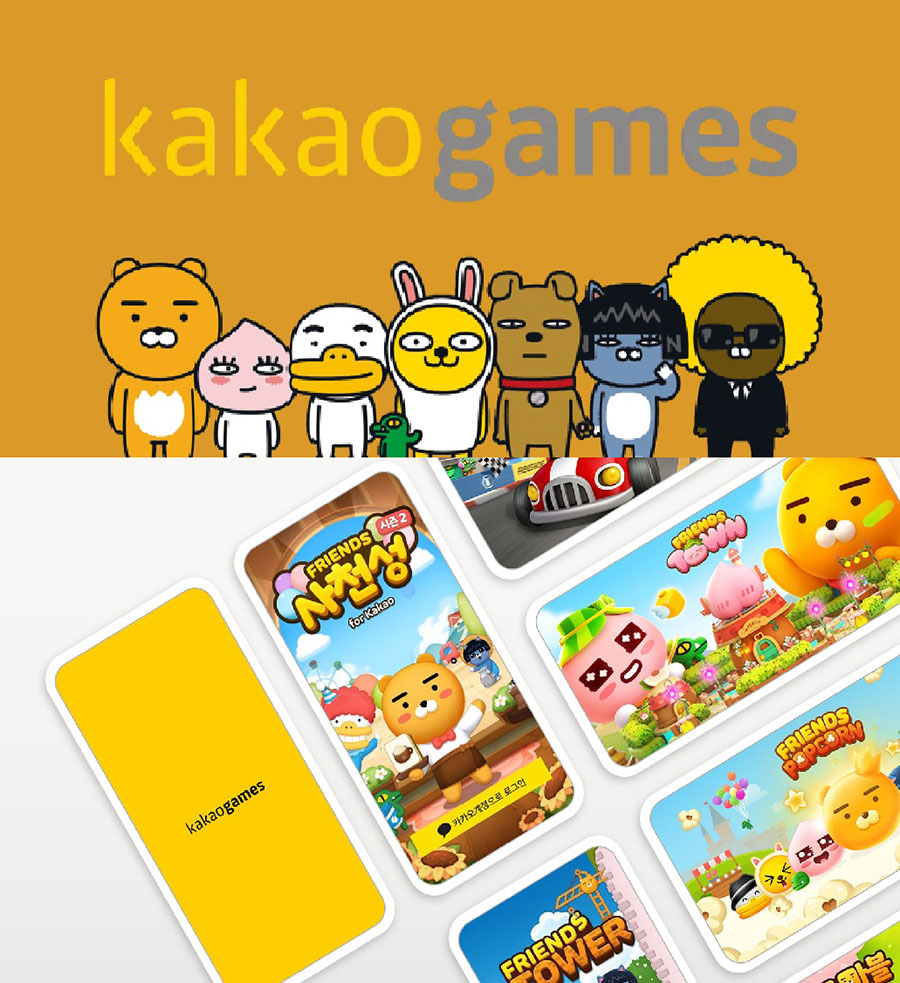 For most Koreans, video games are first and foremost a way to socialize and spend time with friends, so tacking on multiplayer, in-game chat, social media, and deals for friends is always a solid plan. For example, when the Kakao messenger was integrated into Candy Crush Saga with exclusive stickers for Kakao users, this greatly increased the title’s popularity. But Kakao is very demanding when it comes to quality. Don’t start negotiating with them until your game has been successfully adapted for the Korean market.

When it comes to South Korea, you can’t be too much of a perfectionist — Korean gamers are very picky. Errors, bugs, and bad voiceover will most likely kill any desire they might have to keep playing your game. And since the Korean market is incredibly competitive, with countless titles vying for gamers’ attention, you’ll have to adapt everything, from the text to the gameplay, polishing and re-checking the results over and over again. So we strongly recommend entrusting your game’s Korean localization to actual Koreans. And, needless to say, you’re going to need final LQA testing.

We’re always eager to help with localization and LQA. Especially since we have professional South Korean translators at one of our branches near Seoul. And since game localization has been Logrus IT’s primary specialization since 1997, you don’t need to worry — we can make your game right at home in any country on Earth.