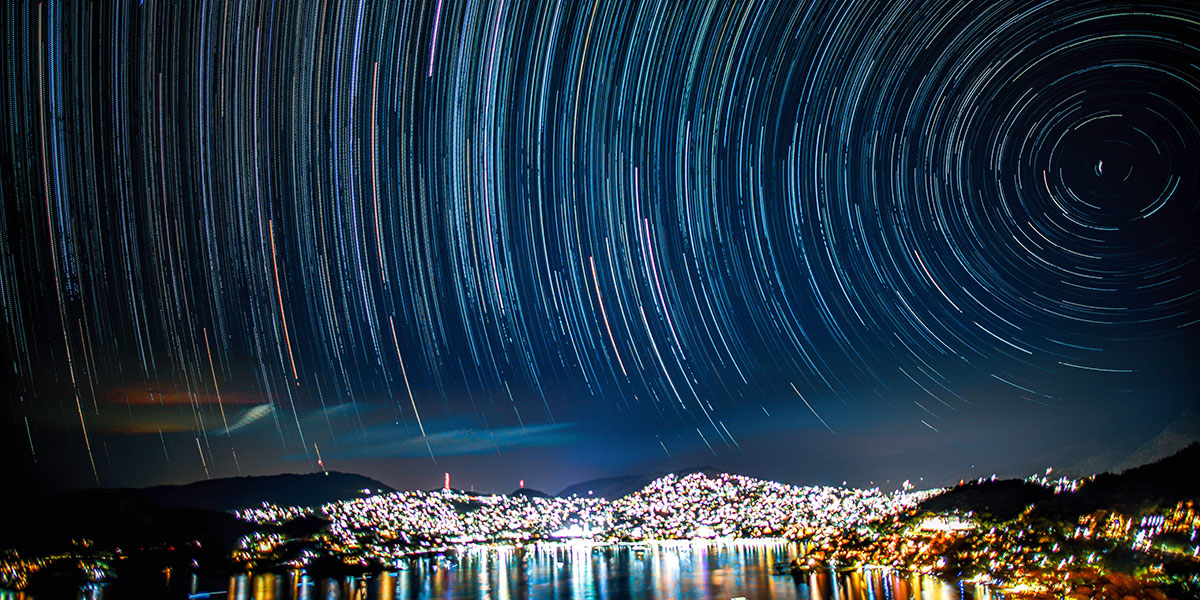 For what audience are you localizing your game? Many developers prioritize major markets with lots of gamers, opportunities, and impressive stats — even if the competition is fiercer there. This can lead them to unfairly ignore markets that are less conspicuous, but just as promising. Latin America is a perfect example.

Latin America includes South America, Central America, and the southern part of North America. It has 26 countries, including Mexico, Brazil, Argentina, Colombia, Chili, etc. These countries were part of Spain or Portugal until the 20th century, so Spanish and Portuguese are the primary languages spoken by most Latin Americans.

Brazil alone has a population of 200 million Portuguese speakers. That’s 20 times the population of Portugal. This is why Latin American culture has had such an influence on European culture. You can hear Brazilian music on the streets of Lisbon any day of the week.

On the other hand, Latin America also includes 21 Spanish-speaking countries. And Spanish is one of the most widespread languages in the world. It’s spoken by 538 million people. 300 million of them live in Latin America. Let’s zoom in on the map — Mexico has a native population of 130 million, Colombia — 51 million, and Argentina — 45 million. By comparison, Spain’s population is only 46 million.

But, most importantly for us, Latin America is home to 289 million gamers. That’s a quarter of the world’s gaming population. 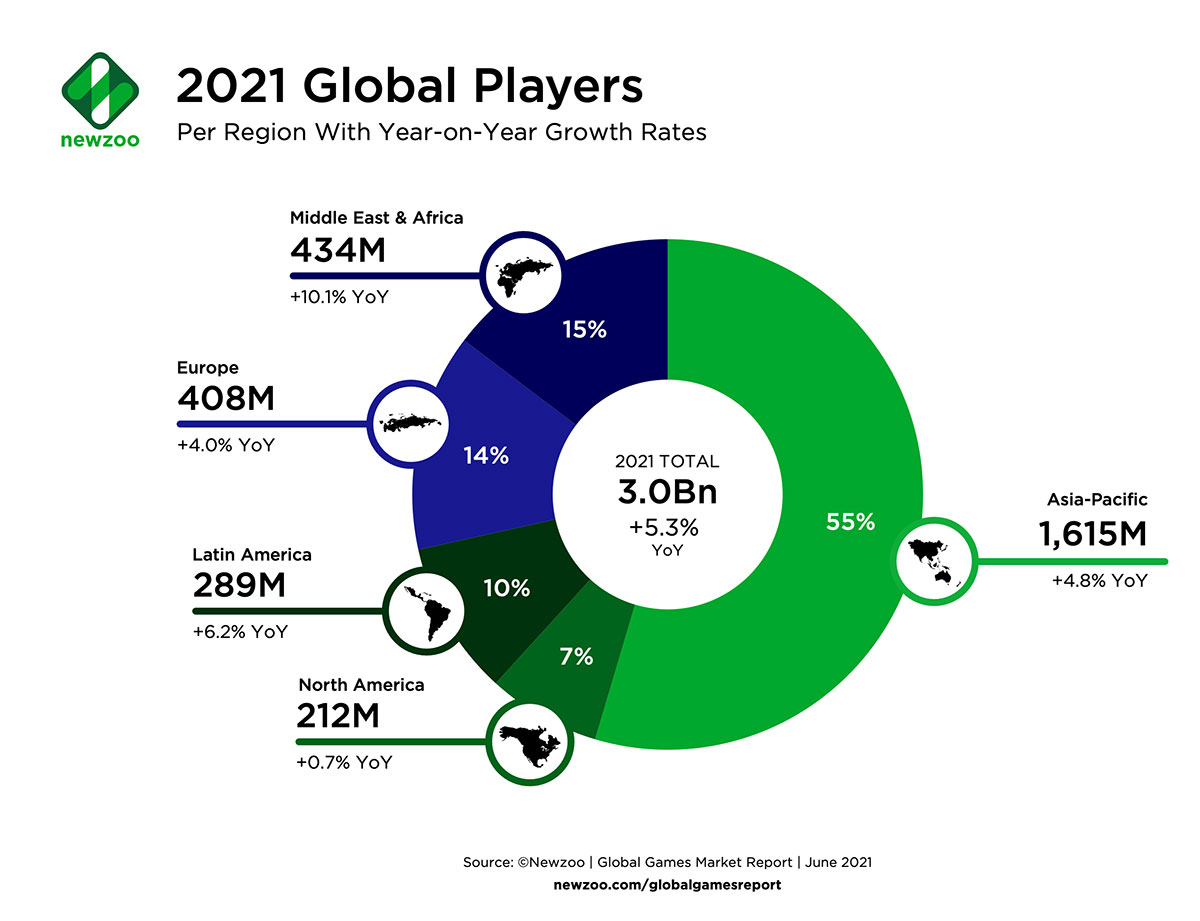 So here’s the obvious question: why isn’t Latin America one of the three leading regions? Needless to say, one reason is the language barrier and the challenges involved in localization. Another is the high price of gaming hardware. Only 39% of Latin American gamers can afford a console, and only 48% can afford a decent PC, so most people (69%) play video games on their smartphones. Moreover, 87% of players prefer free apps with ads.

According to Newzoo’s analysis, this situation could change for the better as 5G gradually takes root in the region. 20 million Latin American smartphones will support it by the end of the year. This means that the demand for games with high-quality graphics will increase in major markets such as Brazil, Mexico, and Argentina. It will also have an effect on mobile esports. In small countries like Colombia, Chili, and Peru, the sales of indie games will increase.

The Latin American mobile market earned $3.1 billion last year, and by the end of 2024 it promises to set a new record of $5.1 billion. And Mexico and Brazil will be responsible for the bulk of it. Video game sales for 2020 show the beginning of this trend: 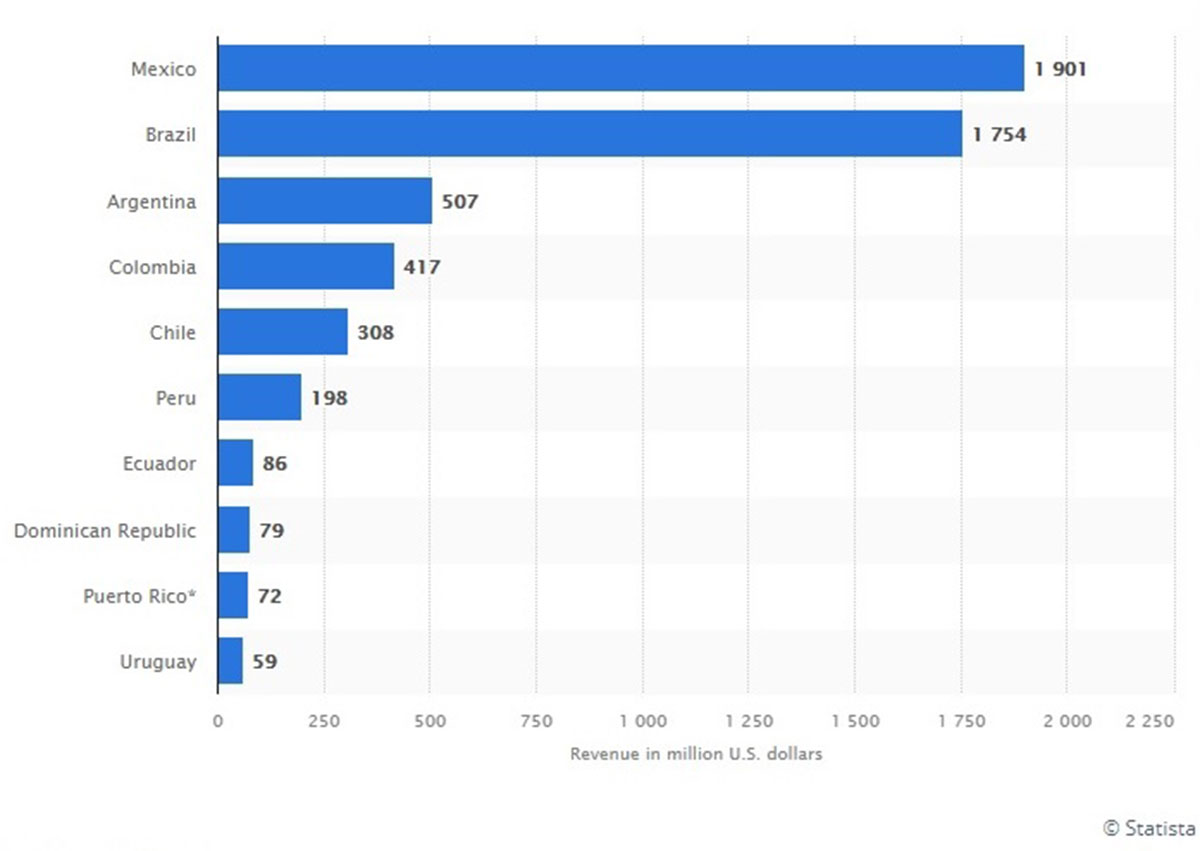 Moreover, taxes on games, gaming hardware, and accessories were officially reduced last year in Brazil. The annual revenue from Brazilian gaming increased by $2.7 million as a result.

When it comes to players’ tastes, casual games are far less popular here than in North America. Latin Americans love to compete. According to Newzoo, 35% of mobile gamers in the region prefer strategy games, 32% prefer shooters, and 30% prefer racing games. The best-selling titles for PC and console are Call of Duty: Warzone, GTA V, Assassin’s Creed, and Cyberpunk 2077.

Gameplay has a major effect on sales. 30% of gamers are thrilled by the concept of exploring an open world. 29% need an immersive narrative. Fantasy and sci-fi are the most popular settings. 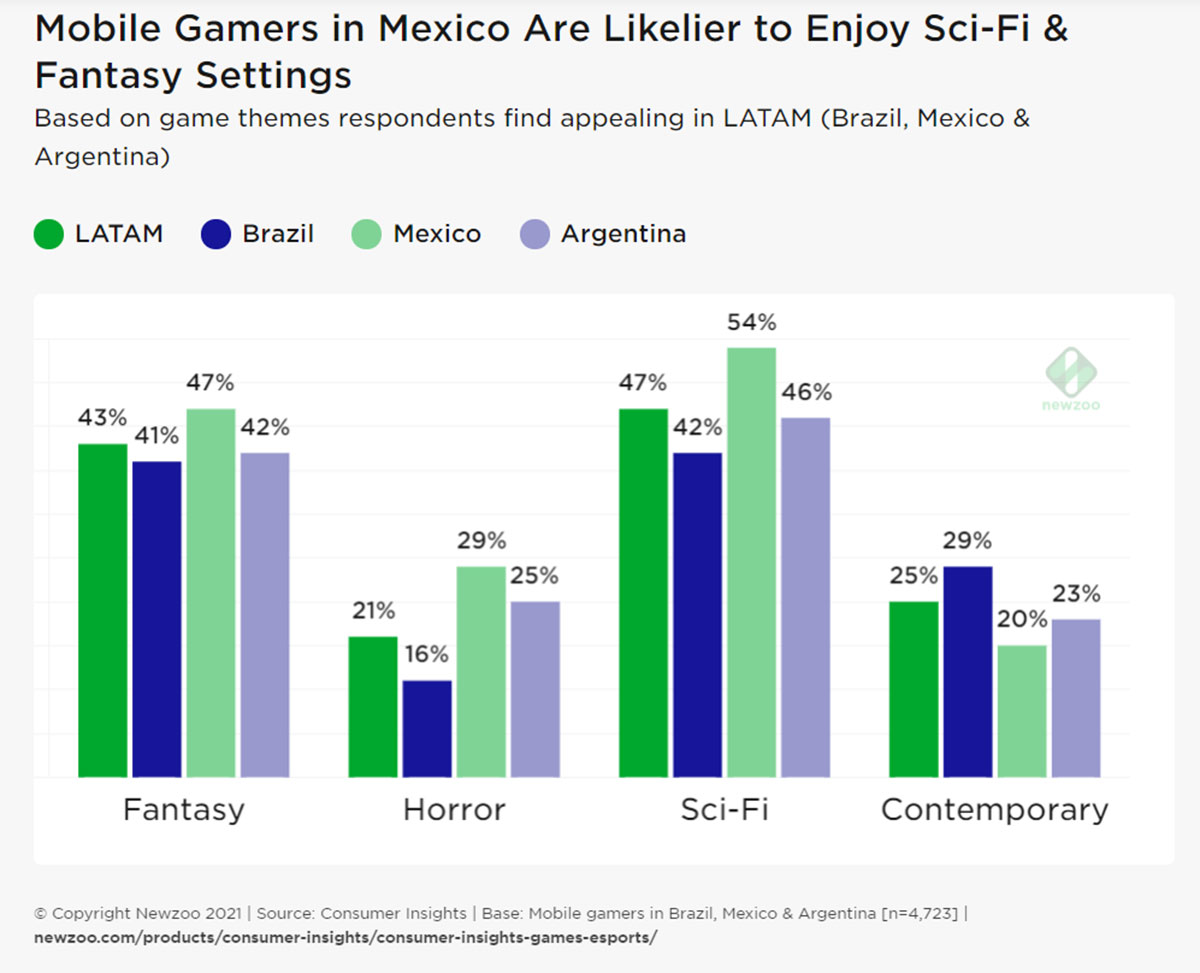 We still have an unanswered question here: how do we go about localizing games for Latin America? Can we localize a game for Argentina and sell it in Peru too? They’re both Spanish-speaking countries in Latin America, right? This might sound tempting, but the Peruvians will sense that the game hasn’t been localized for them. The same goes for Portuguese speakers — translating a game for the Brazilian market isn’t the same as translating it for Portugal. And it isn’t just about making sure your translation is correct. Your game also needs to have a voiceover with a local accent.

Adapting a localization to various dialects is both simple and complex at the same time. It only requires a few little changes here and there, but you need to know the language "from the inside," i.e. you need to understand the perspective of the local population. This brings us to the main distinctions that will help us evaluate the scale of the project.

Translating and Localizing Games into Spanish

The Spanish spoken in Latin America was influenced by Indigenous languages and migration patterns. Over time, it has split into six primary dialects, each with its own distinct region:

You need to be prepared for the fact that not all Latin Americans will be tolerant of dialects from other countries. Some Chileans will be annoyed by Argentinian Spanish, some Mexicans will be irritated by Chilean Spanish, etc.

Translating and Localizing Games into Portuguese

An attempt was made to unify Portuguese in 2008, and it was hated by Brazilians and Portuguese alike. There are just too many differences and too much history separating the two dialects.

Portuguese has been spoken in Brazil since the early 16th century. The language spoken there today still has a lot in common with the Portuguese of that era, albeit with some Indigenous and Spanish loan words.

Brazilian Portuguese is also pronounced very differently. It has more of a sing-song intonation, with every vowel sound pronounced clearly. Portuguese people, on the other hand, speak quickly, omitting some sounds and the ends of certain words. It isn’t always fully articulated the way Brazilian Portuguese is. The difference is very noticeable, so you’ll want to hire native speakers of your target dialect as voice actors.

Localizing a game for any foreign-language market is a work-intensive proposition. But the Latin American market isn’t as insanely competitive as the English-speaking market. New titles generate a lot of buzz. And, most importantly, they get noticed. The Latin American market represents an amazing opportunity for major companies and indie developers alike.

This is especially true now, when it still has so much untapped potential.

How to Boost Game Monetization in Developing Countries